As the sun rises, the alms giving ceremony in Luang Prabang takes place on the main street of this Lao town center. Buddhist monks in bright orange robes quietly leave the nearby temples in this UNESCO-listed town and line up to collect their daily meals, offered by the locals and the tourists. In this article, you’ll be able to learn more about the alms giving ceremony in Luang Prabang, as well as how to properly conduct yourself if you decide to attend.

1. It has a deep meaning for the locals

This almsgiving ceremony, or Tak Bat, dates all the way back to the 14th century. It is a long-established tradition in the Laos Buddhist culture, as well as a sacred ceremony for the locals offering homemade sticky rice to the monks. This ceremony is conducted in silence and rules apply to observing the ritual, as well as participating in it. Unfortunately, many tourists disrespect the rules, so the ceremony isn’t quite the same as it used to be.

The ancient ceremony of alms giving ceremony in Luang Prabang has a very deep meaning for the locals and the Buddhists. The ceremony in itself is peaceful and spiritual and comes with its own set of unspoken and spoken rules and etiquette. 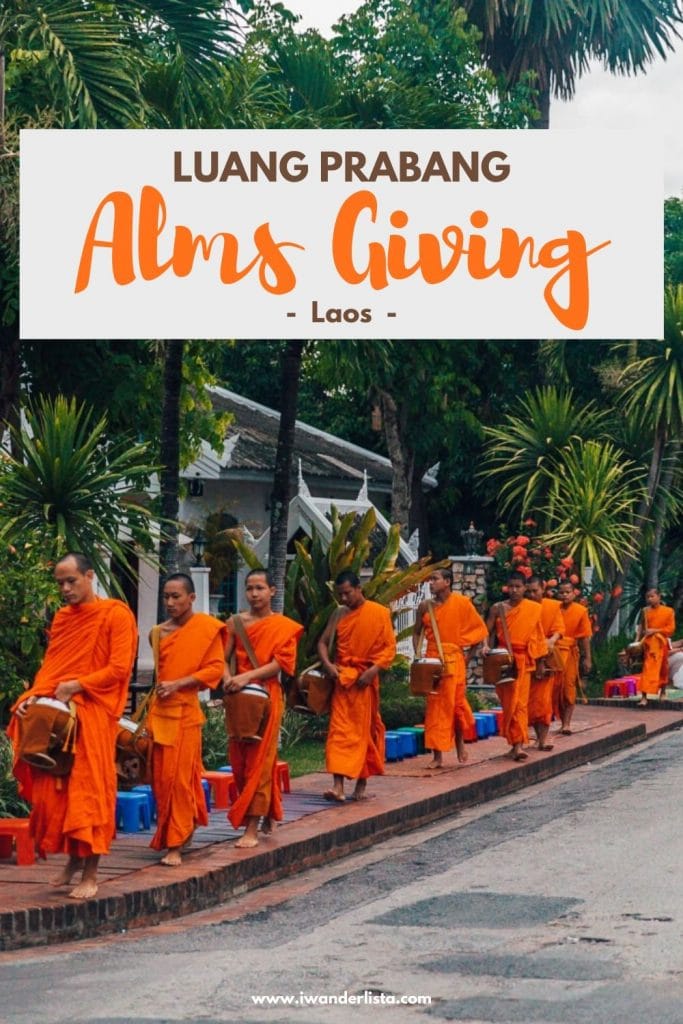 2. When and where is the alms giving ceremony in Luang Prabang?

The ceremony, as mentioned, takes place every day at sunrise. There is no exact time, but expect it to start at around 5.30 to 6.30 am from March to October and from 6.00 to 7.00 am November to February. If you are Buddhist, then feel free to participate and contribute an offering. The offering is usually sticky rice, prepared by the locals or your hotel. Avoid buying sticky rice baskets from the street vendors selling along the monks’ route – it is exactly this kind of action that contributes towards the ceremony becoming such a tourist spectacle (more on this topic at the end of the article).

You will notice the main street near the center gets filled with small chairs in front of the hotels. Kneel down (or sit in the little chair if you have problems with kneeling) to present your offering to the monks if you decide to partake, and don’t look at this as a selfie opportunity. Tuck away your camera and attend in a quiet and respectful manner.

3. Respectfully observe, do not participate

If you are not Buddhist, observe the ceremony only. Don’t get sucked into the tourist trap, and respect the tradition from a respectful distance instead. It is considered very offensive to disrupt the ceremony, so if you plan on taking pictures, do so with a zoom lens and without flash.

Those traveling with small children should avoid attending the alms giving ceremony in Luang Prabang if the kids cannot stand and observe quietly. The only way to keep this as traditional as possible is if we all respect the rules that have been in place for centuries.

4. How to dress and behave

Dress appropriately whether you want to partake or observe. Cover your shoulders, chest, and legs, and make sure you do not make physical contact with the monks. For a more authentic experience of this ceremony, go on a parallel street or lower down the main road instead and avoid the town center.

5. The reality of the alms giving ceremony in Luang Prabang

I was really looking forward to witnessing the almsgiving ceremony in Luang Prabang. The alarm clock went off at 5.00 am and we were out of the hotel by 5.30 am, just in time for the sunrise. Despite my excitement and the uniqueness of this tradition, we witnessed something quite different.

Now, mainly a tourist spectacle, you’ll see big crowds of (mainly) Chinese tourists sitting in small chairs, offering sticky rice bought from the locals who are trying to earn a penny from tourism and the popularity of this ceremony. The whole ceremony has become a tourist circus and the locals sell their rice baskets to any tourist willing to participate in the giving, Buddhist or not.

Another problem here is that there are so many tourists participating in the ceremony, that the monks can’t eat all the food given to them. So they throw it away to the bins in between the rows of tourists. So much rice in the bins, that it really makes you question the entire purpose. A local told me the rice in the bins goes toward the poor families, but I didn’t see that happen so I’ll take that statement with a grain of salt. We decided not to participate and instead just observed the ceremony. 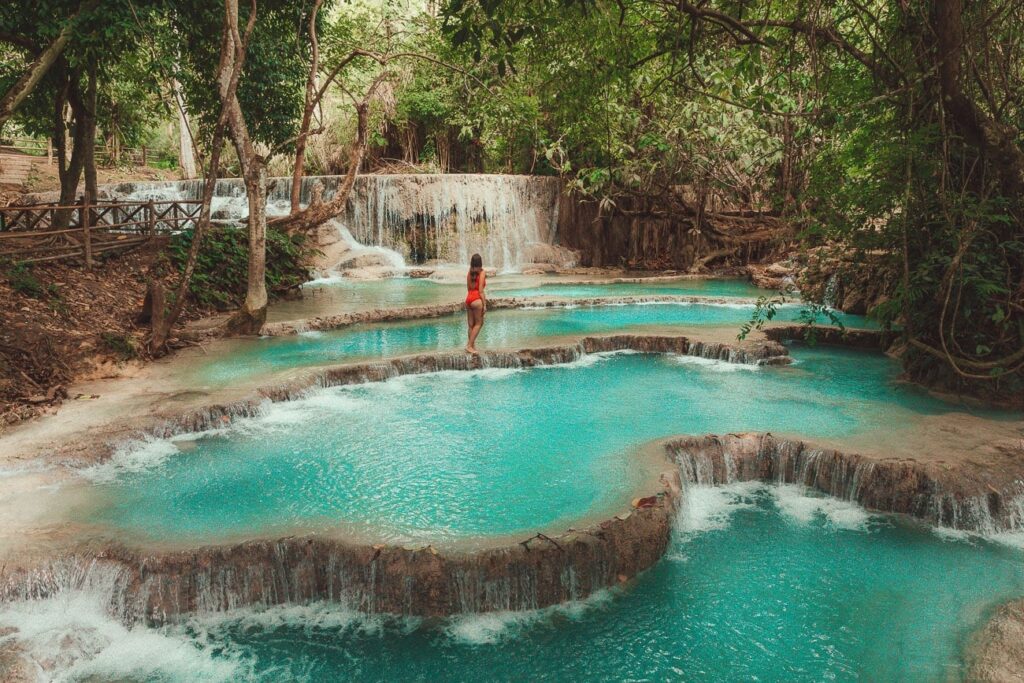 Don’t forget to visit one of the most amazing waterfalls in Asia when you’re in Luang Prabang:

Kuang Si Falls Laos – Everything You Need to Know

I will give you this tip though: if you walk further down the road, away from the hotels – you will only see older locals giving alms. There are no bins there and it is a lot more authentic than in the center.

What are your thoughts on traditions and culture becoming tourist attractions? You can also see all my Instagram stories from Laos here. 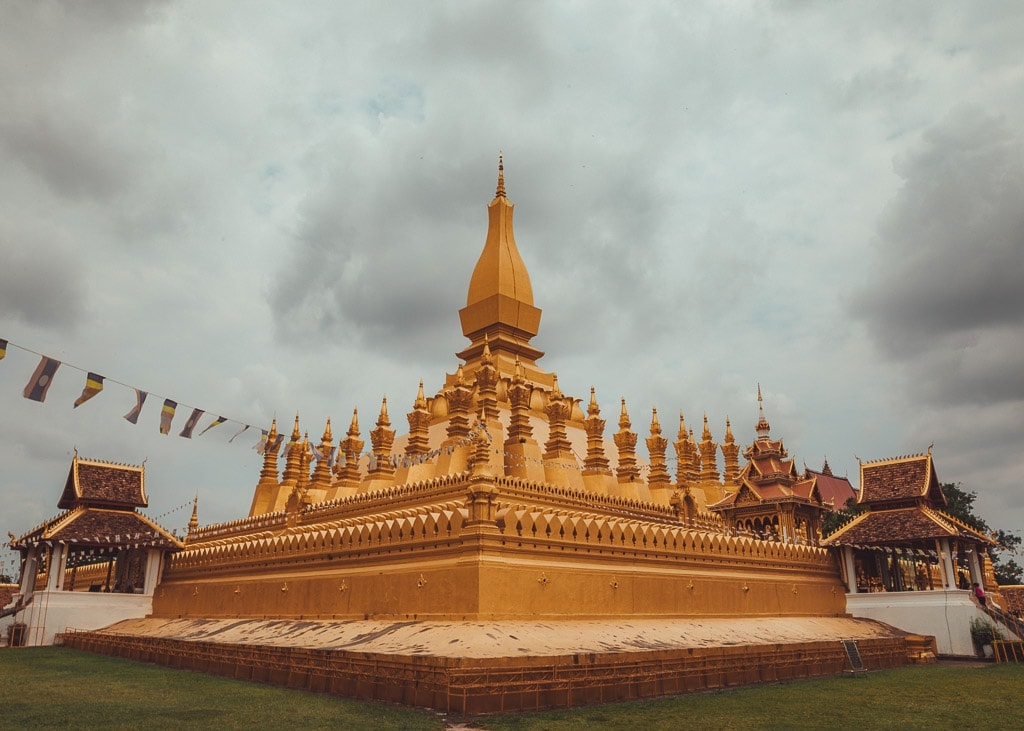 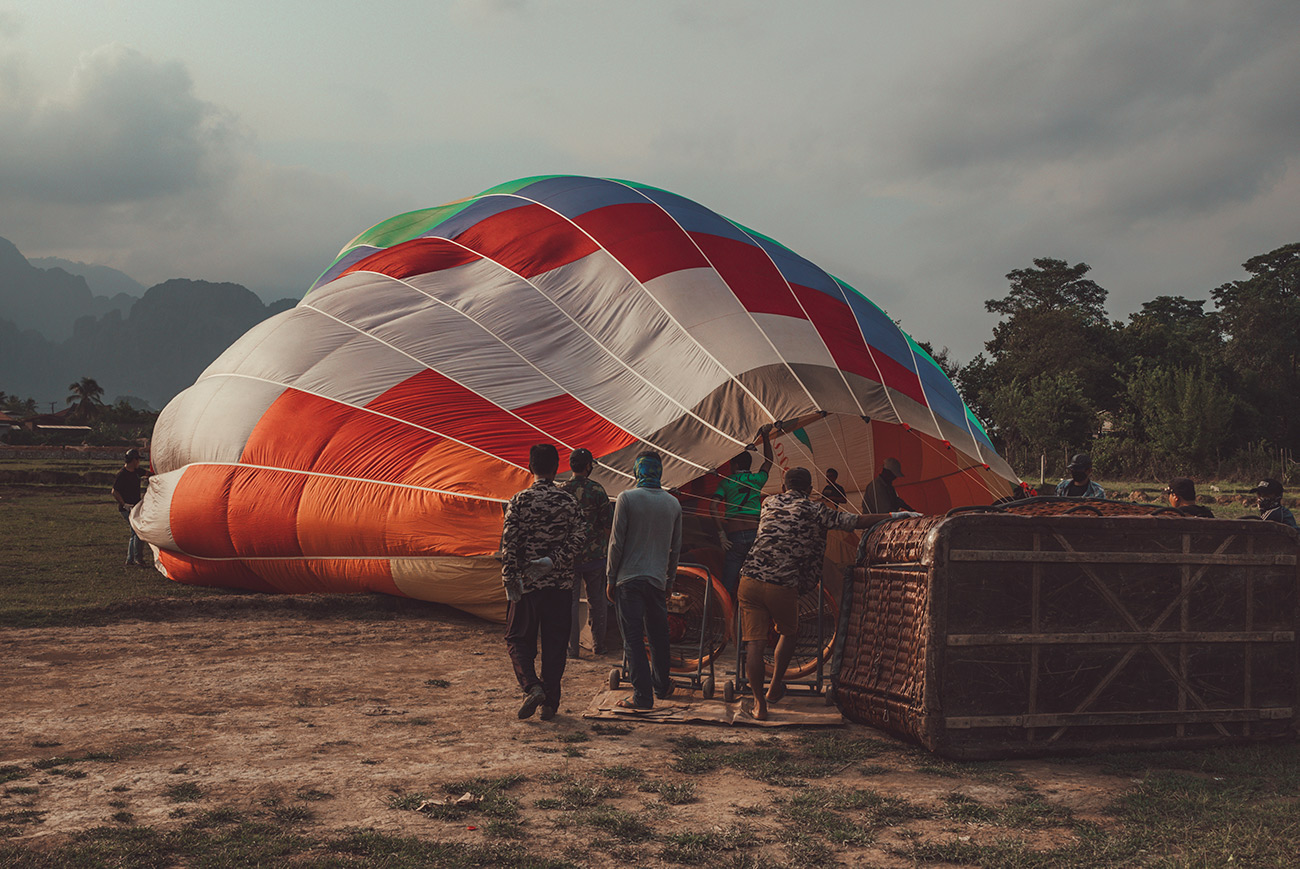 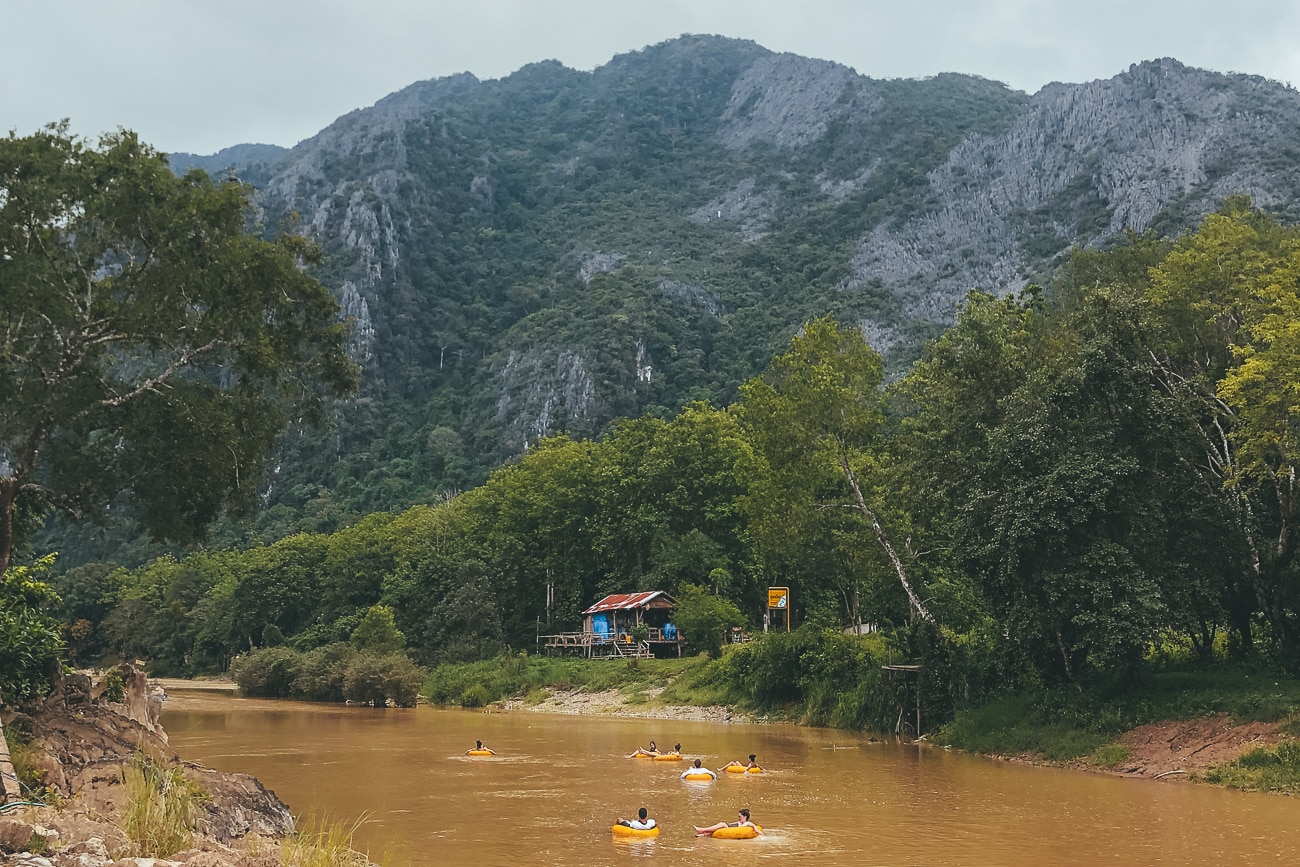 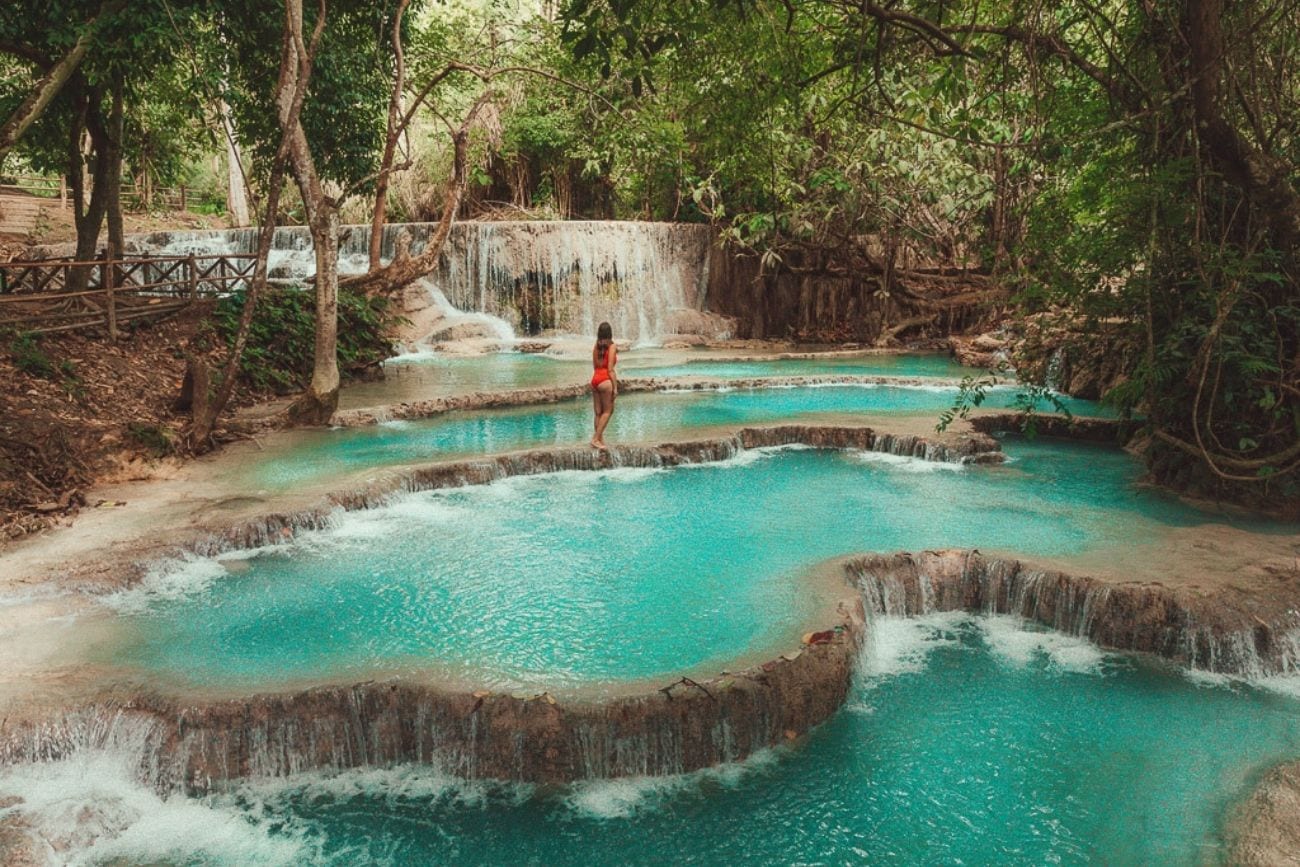 This is so neat! I'd never heard about the ability to participate in this before. Love your honesty about the experience, this helps so much instead of making it this mysterious bucket list item. Thanks for being so thorough!

Thanks so much Megan! Glad you found it helpful :)

I've heard about this before. It's so sad when something so interesting and unique becomes a tourist attraction... I'm glad you're sharing the message on how to behave at this ceremony, and I hope more people will read it and think about their behavior before participating. Thanks :)

Thank you Cecilie! Yes, I hope it spreading this message helps the future of the ceremony, would be a shame if it became solely a tourist attraction later on :/

This i s the first time that I'm getting to see and learn about the Alms Giving Ceremony. It was very enlightening, so thank you for sharing.

Wow, this is honestly a beautiful post. Your photos are breathtaking as well. I’ve never heard of this before and would love to witness it. I hate the idea of contributing to overtourism though. It’s always a tough decision.

Thank you, how nice to read that! Yes, I agree - but thankfully there is a way of doing it that doesn't contribute as much to over-tourism :)

What a beautiful ceremony and what a shame it has been overshadowed by the tourist element. I like to get an 'authentic' taste of the destinations that I visit by observing the local traditions, but it's always sad to see them becoming more of a tourist spectacle. I love your guide to observing the ceremony respectfully, thanks for the advice on honouring the ceremony traditions.

I couldn't agree more - it's a double-edged sword for sure! Thank you :)